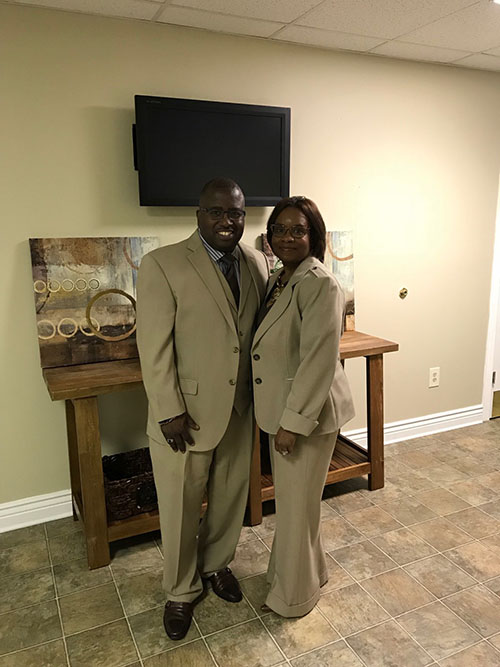 Apostle Kevin L. Jefferson is from Columbia, Missouri and has preached the gospel both nationally and internationally for 38 years. Before coming to LaGrange, he pastored Grace Fellowship in Montgomery, Alabama for 10 years. He is a 21-year military veteran who served his country with distinction. Currently, Apostle Jefferson is Bi-vocational working as Sergeant Jefferson in the ROTC program at Troup High School. He obtained a Bachelor of Arts degree from Troy University in Resource Management. Apostle Jefferson is called to the Five-Fold ministry with a strong emphasis on apostolic and prophetic government. He has been called, “The Apostle of Wealth.” His comedic nature increases the enjoyment of services.

A native of Flint, Michigan, Pastor Cowenda Jefferson is an ordained pastor, Five-Fold Teacher of the gospel, and anointed psalmist. In her professional career, she is a Licensed Professional Counselor and Certified Advanced Alcohol and Drug Counselor for 15 years. Pastor Cowenda attended the University of Michigan-Flint for a Bachelor of Science degree in Public Administration and possess a Master of Arts degree in Counseling from Spring Arbor University, both in Michigan. She is also a graduate of Agape Faith Bible Institute in Birch Run, Michigan. While living in Michigan she was called to found, established, administered and instruct two adult interdenominational Bible colleges; Midland Bible Institute of Midland, Michigan and Dominion Empowerment International University in Flint, Michigan.

The Jefferson’s have been married for 8 years and have two adult children; Brandon and Megan and two grandsons: Jaxson and Isiah and one granddaughter, Jordan.